Clay Collard has gatecrashed boxing to become an unlikely star

CONTRARY to rumours going around, pro boxer and mixed martial artist Clay Collard has not picked up a baseball bat or basketball to fill in the time before his next fight.

That’s not to say he hasn’t thought about it. “I am very athletic, so if I was a little bigger, I might have tried to play football, but I’m kinda small for that.”

The 27-year-old Collard laughs, content to be the Bo Jackson or Deion Sanders of combat sports at the moment, and he’s got every right to be enjoying this time, as he’s gone from being a full-time mixed martial arts fighter to a young man who is currently being talked about in boxing circles as the 2020 Fighter of the Year thus far.

And they’re not kidding.

“I guess I’m still grasping it a little bit, but it’s awesome,” he said of his sudden jolt of fame thanks to a 4-0 run in the ring this year that includes two knockouts and three wins over undefeated opponents. “I put a lot of hard work in and I’m dedicated to this.”

That dedication is evident, and it always has been, no matter what discipline he was in at the time. At first, he was all-in on boxing, which was introduced to him by his grandfather when he was just 11 years old. Collard went on to put together a 65-20 amateur record and was a Golden and Silver Gloves champion in his home state of Utah, earning him the nickname “Cassius.”

But a couple weeks after his 18th birthday, he traded his boxing gloves for four-ouncers and he began a mixed martial arts career, fighting on the local regional scene in shows entitled “Mayhem & Motocross,” “Fight Kings,” and “Rocky Mountain Fight Championships.” It wasn’t the big time, but it was a way up, and by the time he was 21, he was 13-4 with 1 NC and he was on the radar of the UFC, who gave him a call to come in on short notice as a replacement to face future featherweight champion Max Holloway. How short? Eight days.

“There’s no hesitation with me,” he told me after the August 2014 fight, which he lost via third-round TKO. “I’ll fight anybody, anytime, anywhere. I love fighting. But taking a fight on short notice is one thing if you’ve been in the gym; I had been out of the gym for a month and a half, dealing with some personal things in my life. But when I got the call, I just said ‘I’m down, I’m a gamer.’ I won’t ever turn down a fight.”

That attitude and his gutsy effort in defeat earned him a call back four months later, and with a full camp, he defeated Alex White. He would drop his next two bouts in the UFC and was released in 2015. What followed was a break of nearly two-and-a-half years as he re-evaluated his place in MMA and sewed up some loose ends in his personal life.

The only appearance during that time? A four-round split decision win over Jamey Swanson in his pro boxing debut in June 2017. He basically took the fight when he needed the money to fix his car, but it did light a spark that coach Ryan Ault wanted to turn into a fire.

Collard returned to active duty in MMA in 2018, going 2-1 in regional shows, and by May 2019, he was giving boxing most of his attention.

“My coach said from the beginning that if I was to box, to box the toughest guys,” said Collard of the philosophy of his return to the ring. “He said fighting those other guys is gonna be a waste of time. I don’t have the time to pad up my record and pick and choose fights. I have to do it a little different.”

He did. By the end of 2019, he was 4-2-3, with his opponents holding a combined record of 45-3. If that’s not different, nothing is. And while his own record wasn’t pretty, he was staying busy and getting a positive reputation as a reliable fighter who showed up to fight. MMA wasn’t treating him too badly, either. Collard won two MMA fights in 2019, and in the summer of last year, it was déjà vu when the UFC called him to take a short-notice injury replacement fight against another hot prospect in Devonte Smith. Collard was all-in, but health issues on fight week ended his hopes of Octagon redemption. “That was a thing where it just didn’t work out,” said Collard. “I was excited for the fight, I was ready for the fight, and it just didn’t happen. The guy (Khama Worthy) got a fifty-thousand dollar bonus fighting him, so it was a missed opportunity there, but everything happens for a reason and I don’t know if I would have been 2020 UFC Fighter of the Year, but I am in the running for that in boxing.”

That’s as far as Collard will go when it comes to talking about his accomplishments this year, but he hears the same talk as everyone else does, and it all comes down to his willingness to step up and bet on himself during the COVID-19 pandemic that has shut down so many hopes and dreams. But not Collard’s, and after wins over two more unbeatens in Quashawn Toler and Raymond Guajardo in January and February, respectively, he watched the boxing world go on pause as the coronavirus raced through the globe.

That was okay, as he had a backup plan, signing with MMA’s Professional Fighters League in March, and he didn’t stop training. “When everything happened, it was just that we gotta find a way to make it work,” he said. “And that’s life. I stayed working, stayed running. We got kicked out of a couple parks training, but I just tried to do what I could and kept going during all that.”

The old fight game adage is that if you stay ready, you don’t have to get ready, but it’s never as simple as that. In April, the PFL announced that it was postponing its 2020 season due to the coronavirus, meaning that Collard would be without a fight until 2021. Enter Top Rank, who offered Collard a bout on its second show back on June 18. Collard got permission from the PFL to take the bout, and a six-round split decision win over David Kaminsky, another unbeaten opponent, later, everyone wanted to see Clay Collard again.

“I try to put on exciting fights, and to do that you’ve gotta work hard and you gotta believe in yourself and make sacrifices,” he said. “There’s a lot of stuff that goes into it. But I’m just excited to fight and I’m excited that people are liking my fights and paying attention to them. They understand that I’m beating undefeated guys and not just fighting easy opponents. I want a big-name fight, eventually. Maybe a couple more boxing matches and I want a big-name fight.”

Lorawnt T. Nelson wasn’t that big name, but in the new normal in boxing, fans were looking forward to the next verse in the Ballad of Clay Collard in July, and the new cult hero delivered, stopping his foe in two rounds.

It’s approaching late summer now, and Collard wants to stay as busy as possible because come 2021 it’s back to MMA, where he can truly hit the jackpot if he wins the PFL tournament that awards one-million dollars to the winner.

“PFL is supposed to be starting next spring, May 2021, so I have a limited amount of time to be able to box, so I want to get some boxing matches in and fight and then see what happens from there.”

What may happen is that a few more wins in the ring could leave Collard with a decision to make. “I have to make a choice between one or the other,” he admits. “Neither of them are really bad choices, in my opinion. And there’s not a lot of fighters that can say that about boxing and MMA. It’s mostly just one or the other.”

Collard has now made a name for himself in both sports, and having to choose between the two is a good problem to have for a young man who some say lucked into the opportunity of a lifetime by being at the right place at the right time. But isn’t that the essence of anything in life? 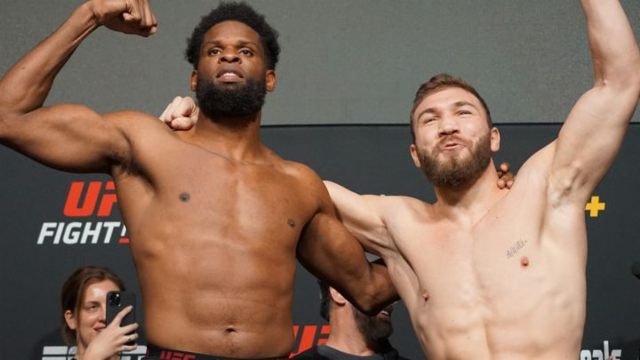